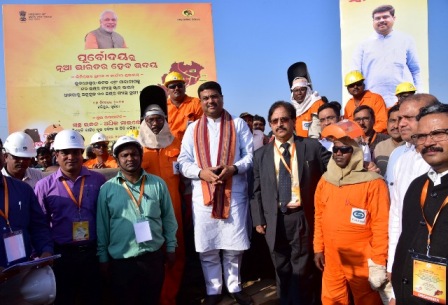 NF Bureau: Although the BJP has not decided any CM candidate for Odisha officially, there is a growing consensus within the party that Union Minister Dharmendra Pradhan would be the face of the party in the run up to the 2019 polls. The party, however, would continue to rely on ‘Modi Charisma’ to sail through in the State.

Rajesh Pattnaik, a senior BJP worker, who has been closely associated with BJP’s Media and IT Cell for years, has tweeted a video on March 1, which gave a big thumbs up to Dharmendra Pradhan. He also coined the slogan ‘Kendra Re Narendra, Odisha Re Dharmendra’ (Narendra Modi at the Centre, Dharmendra in Odisha), which was endorsed by others.

It can be recalled that Union Minister Jual Oram had confirmed the same in November 2018, when he categorically said that Dharmendra Pradhan would be the BJP’s CM candidate for 2019 polls. Political pundits believe that Dharmendra is growing taller in Odisha BJP like Narendra Modi in the Central BJP.

Whether BJP is able to match BJD in the upcoming polls and how many seats it would win, would remain a big question. But, what’s clear that there is no alternative to Dharmendra in Odisha BJP and he would remain the undisputed leader of the party in the state whether BJP wins or loses.