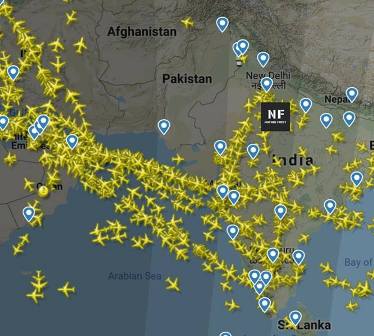 NF Bureau: Amidst reports of Indian Navy and IAF moving from different corners to launch attacks on Pakistan, residents of Karachi had a sleepless night yesterday. Senior journalists, strategists as well as others kept tweeting, triggering the panic button.

Multiple PAF Jets were seen flying in the skies in Karachi, while blackout was reported from several areas. Later, a high alert has been issued by the Government of Sindh in Karachi along with some emergency orders. The residents look and sound anxious and curious, as they keep wondering what action India is going to take against Pakistan.

While the flight operations continue as usual across the world, Pakistan has suspended everything out of panic, fearing a strong retaliation from India. Currently, not a single flight is seen in the Pakistani skies.